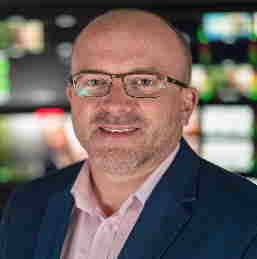 Richard Waghorn is Director of Operations, Technology and Transformation at Raidió Teilifís Éireann (RTÉ) in the Republic of Ireland. He has 25 years’ experience of driving performance, efficiency and digital transformation for major media organisations, including RTÉ, the BBC and South Africa’s SABC. At RTÉ, Richard has restructured the technology function, increased the market share of Saorview, (Ireland’s free-to-air digital television platform), and is leading a programme of organisational transformation. A former member of the European Broadcasting Union’s Technical Committee, Richard is currently a member of the IBC Council.

At the SABC, Richard led the technology division holding the strategic and operational leadership of the digital agenda, TV and radio production facilities, outside broadcasts and IT. He led major digital and infrastructure projects, and drove operational efficiencies.

At the BBC, Richard led the distribution business unit which delivered universal access to television, radio and digital services on broadcast platforms. He led the BBC’s involvement in the national digital switchover programme and was a board director of Freesat. Prior to this, Richard was the project manager for the launch of Freeview in 2002.