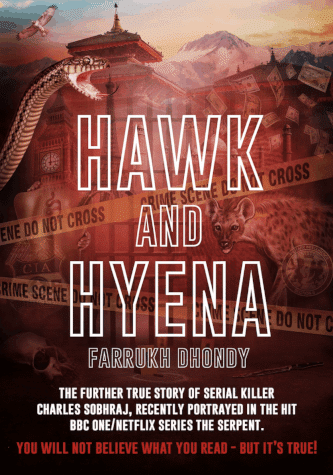 Farrukh Dhondy knew serial killer Charles Sobhraj very well. He still does. Dhondy tracked his movements across the world over years. He was continuously in contact with him. From Paris to London, Kathmandu to India, London to Nepal, this amazing true story now exposes the truth behind the killer world of the infamous Charles Sobhraj, his many women, his murders, and his mercilessly cruel participation in world events – and television mogul Farrukh Dhondy’s fascination with a serial killer’s degraded and violent life.

In 1997 Dhondy’s world, in his glass-walled office as Britain’s Channel 4 Commissioning Editor, suddenly exploded into the world history of the last 30 years when Sobhraj phoned him from Paris.

Characters in this true-life story include Boris Johnson, then editor of The Spectator, former prime minister Tony Blair, the CIA and MI6 – among many others.

The most sensational events described include: Sobhraj‘s attempt to help develop the weapons of mass destruction with which Tony Blair sought to justify the Iraq war; Sobhraj’s knowledge of the terrorist bombing of Mumbai; his betrayal of his terrorist bomber friend Masood; his close contact with the CIA; his prison escapes, and his choice of decades of incarceration in prison to avoid execution.

Eye-opening in its totally realistic, unsensational and matter of fact style, this incredible book is placed at the intersection of life and death, crime and punishment, sex and killing. The events described are hard to believe – even when we know that they are true. Dhondy unjudgmentally depicts Sobhraj’s completely merciless killing of scores of innocent people with bleak astonishment.

Hawk and Hyena – What Ever Happened to The Serpent – available on Amazon here.

Bite-Sized Books, now in its 7th year, has built a well-regarded reputation for publishing shorter (10-12,000 words) books that fit our modern reading habits and lifestyles. People are demanding condensed but still comprehensive books that go to the essence of their subject matter. The genre has inspired new authors previously daunted by the prospect of writing full-size typescripts and facilitated a radically shorter journey from ‘concept to bookshop’. Bite-Sized Books, whilst smaller than its big industry rivals, has an enviable roster of authors and contributors. They include politicians such as Vince Cable, Sir John Redwood, Lord Heseltine and Ed Vaizey, and high-profile media leaders, broadcasters, and journalists such as Mark Thompson, Clive Myrie, John Mair, David Elstein and Jon Snow. Academics and economists are also in the mix with publications by Vicki Pryce, Patrick Minford, Dr David Bailey, Victor Hill, Alex de Ruyter and Professor Graham Gudgin.

Odyssey was founded in 1981 and was one of the very first independent video distributors ever. Odyssey has released hundreds of true story feature films and TV movies and may be said to have created the “true story phenomenon”. In one year alone it had 39 Top 40 video hits. Odyssey released and restored nearly all of the Merchant Ivory feature films as well as releasing all of Barbara Taylor Bradford’s mini-series and TV movies.
Adrian Munsey, Odyssey’s creator and CEO, also restored TOMMY, released SCUM and many other fine feature films as well as becoming known as a performed and recorded composer and songwriter. In 2005 Adrian Munsey co-founded the highly successful True Movies group of television channels – still the most successful launch SKY has ever had. Odyssey Television has produced 32 television documentaries on the British Royal Family, one on President Clinton. Adrian Munsey has produced two feature films and has two more in development. The relaunch of Odyssey in 2011 restarts a fine tradition started 30 years ago. IMDb.

Kunal Kohli is a filmmaker from India who has won box office rewards & awards for his films. He is most well known for ‘Hum Tum’ & ‘Fanaa’. He recently made a web series on the Indian Mythological Ramayana titles ‘Ramyug’ on MX Player, is releasing Lionsgate’s first foray into Indian Content with a remake of the American Show ‘Casual’ titled ‘Hiccups & Hookups’ which will stream worldwide on Lionsgate & affiliate platforms from Nov 26th. Under production is a young love story titled ‘Bobby & Rishi’s Love Story’ which will mark the debut of Shekhar Kapur’s daughter Kaveri Kapur into the world of acting. Kunal is also a popular judge on reality shows in India & was even hosted India’s first Film Critique show on ZeeTV. Kunal is currently directing films & web series for various Networks & Studios. IMDb.