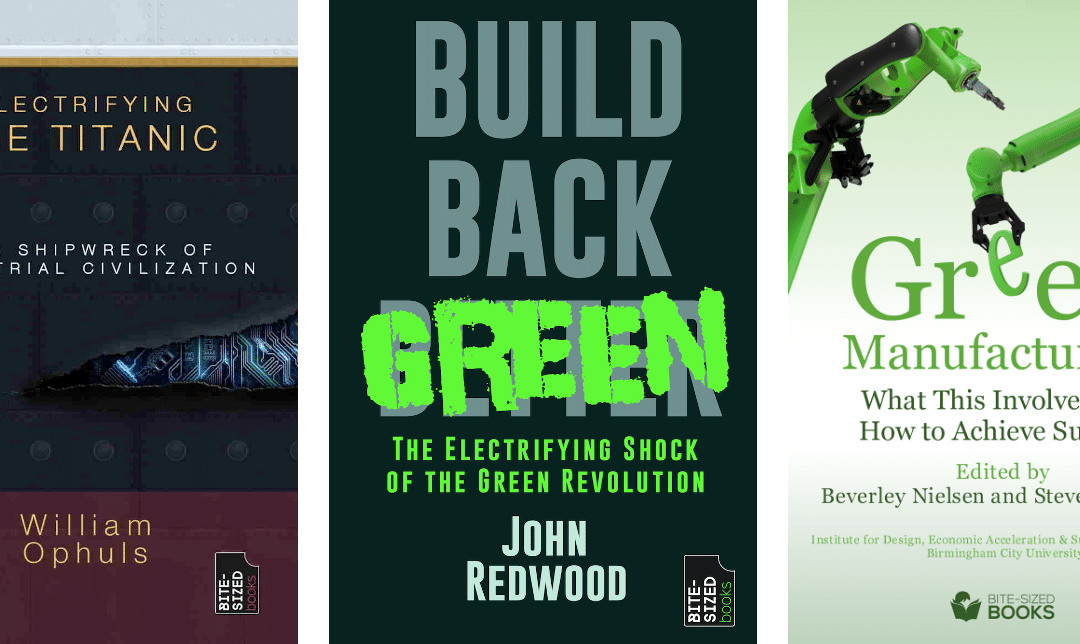 Bite-Sized Books is playing its part in sharing know-how, advice, and the social consequences of climate change in the lead up to and beyond the COP26 summit.

John Redwood’s well-reasoned, compelling, and timely book, Build Back Green – The Electrifying Shock of the Green Revolution, reminds us there are consequences to the upcoming ‘transition to green’.

He claims, “we live in revolutionary times. A movement to harness the state to root carbon out of our lives has now entrenched itself in government as the prevailing policy. Joe Biden’s America joins hands with the European Union in declaring war on carbon dioxide. A clever China agrees in principle and corners the market in many green products, whilst still increasing her output of the unpopular gas.”

“The protagonists”, he continues “strike an optimistic tone. They assure us the revolution will be carried through with a wide range of new green jobs. They hold out the promise of skilled people running windmill and battery factories, joyously powering the revolution of their dreams. They comment little on the other side, as they effectively sign the redundancy notices of all those in the oil and gas business, in drilling technology, in internal combustion engines, conventional ships, planes and vehicles, gas heating and much else. They have in mind a huge transition from the fossil fuel economy to the green electricity economy. They want us all to dump our diesel and petrol cars, replace our gas boilers, change our diet away from meat, give up foreign holidays and take to our bicycles.”

He also proposes a solution – surprising and highly logical.

Dr Steven McCabe and Beverley Nielsen, Associate Professors at Birmingham City University continue the environment theme with a focus on manufacturing. Their new co-edited book: Green Manufacturing – What This Involves And How To Achieve Success is an accompaniment to their recently published Bite-Sized Environment book, Exploring The Green Economy – Issues, Challenges and Benefits.

Green Manufacturing features contributions from leading industrialists, industry body representatives, political commentators, and academics. McCabe and Nielsen suggest… “much more must be done in order to enable and support SMEs in a UK-wide switch to environmentally sensitive production across sectors.”

They write, “The world’s population faces a crisis of immense proportion due to emission of greenhouse gases. Scientific evidence, coupled with our direct experience of altering weather patterns, demonstrates the need for urgent and radical collective action to avert climate change. Manufacturing, a sector which developed rapidly following the Industrial Revolution, and though contributing to improving the lives of billions since, has, through intensive use of energy and resources, been a significant contributor to pollution and greenhouse gas emissions.”

The actual experience, practical advice, insights and suggestions make the book a must-read.

And our final worthy complement to Bite-Sized Books’ new Environment book category is the thought-provoking new book from William Ophuls: Electrifying the Titanic – The Shipwreck of Industrialisation.

Ophuls warns, “we stand on the precipice of radical change, change that threatens to end both the modern way of life and the long period of relative peace since the end of World War II.”

“Innumerable warnings, growing increasingly dire as the years have rolled by, have failed to motivate peoples and nations to take the emerging ecological crisis as seriously as it warrants. What is worse, they have chosen exactly the wrong strategy for dealing with the crisis: instead of remodelling their societies and economies in accordance with ecological imperatives, they are trying to maintain business as usual by substituting solar electricity for fossil fuels. But refitting the Titanic with batteries, even if it were possible at this late date, will not avoid ecological shipwreck.”

Bite-Sized readers are given the opportunity to explore the limitations of the human mind that have prevented timely human action. Electrifying the Titanic reveals the bleak landscape of the future that our failure to act has now made all but inevitable. What is in prospect is a reversion to the historical mean. Scarcity will predominate; food will come from human toil, not fossil fuels; and societies will resume their former shape. “The liberal values, practices, and institutions of today will give way to the older, harder ethos found in the works of Machiavelli and Thucydides.”

While it may be too late, Ophuls has a hope that his book will be a stimulus for action to defeat what may be inevitable.

The Rt Hon Sir John Redwood is the Conservative MP for Wokingham, He was formerly Secretary of State for Wales in John Major’s Cabinet, and Shadow Secretary of State for Business, and then the Environment. He headed up Margaret Thatcher’s Policy Unit. He also had a wide-ranging business career, chairing two international industrial groups.

Dr. Steven McCabe is Associate Professor in the Institute of Design and Economic Acceleration (IDEA) and Senior Fellow in the Centre for Brexit Studies (CBS) at Birmingham City University when he has been based as an academic and researcher since joining in 1987 when it was Birmingham Polytechnic.

Steven has published numerous texts, papers, and chapters on various aspects of management, social history and technology. As well as writing a weekly blog for CBS, he regularly comments in the local, national, and international press and media on political, economic, and business issues.

Beverley Nielsen has a background spanning academia, politics, and business. As associate professor and director of the Institute for Design & Economic Acceleration, IDEA, at Birmingham City University she has written about Brexit, manufacturing, sustainable transport, construction, energy, and entrepreneurial ecosystems. She stood as the West Midlands Liberal Democrat Mayoral Candidate in 2017 and currently serves as a district councillor on Malvern Hills District Council in Worcestershire. She was a group director of iconic West Midlands’ brand and publicly quoted business, Aga Rangemaster, and former managing director of Fired Earth. She previously served as director of CBI West Midlands and as a multiple entrepreneur she has helped over 45 businesses through early start-up stages, chairing two of these involved in outdoor learning and ultra-light rail.

Patrick Ophuls (nom de plume, William) served as a Foreign Service Officer in Washington, Abidjan, and Tokyo before receiving a PhD in political science from Yale University in 1973. His Ecology and the Politics of Scarcity published in 1977 laid bare the ecological, social, and political challenges confronting modern industrial civilization. It was honored by the Kammerer and Sprout awards. As an independent scholar and author, he has published works extending and broadening his original argument, most prominently Requiem for Modern Politics in 1997, Plato’s Revenge: Politics in the Age of Ecology in 2011, and Immoderate Greatness: Why Civilizations Fail in 2013.